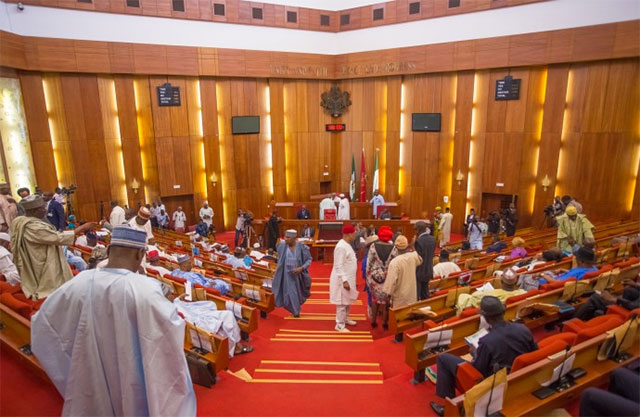 On the 15th day of March, 2016, members of the Nigerian Senate at its plenary session, voted against and consequently, dumped the “Gender Parity and Prohibition of Violence against Women Bill” (which was culled out of the Gender and equal Opportunities Bill) because it failed to pass its second reading.

According to its long title, the bill is for an Act to incorporate and enforce certain provisions of the United Nations Convention on the elimination of all forms of discrimination against women, the Protocol of the African Charter on Human and People’s Rights on the rights of women in Africa, and other matters connected therewith.

The goal of the Gender Parity and Prohibition of Violence against Women Bill was to provide a legislation that seeks to eliminate all forms of discrimination on the basis of sex and gender in private and public spaces, affirms women’s rights to equal opportunities to realize their full potential and provide protection for their bodily integrity and human dignity by giving effect to chapters II and IV of the 1999 Constitution of the Federal Republic of Nigeria, the International Covenants on Human Rights which affirms the principle of non -discrimination and proclaim that all human are born free and equal in dignity and rights, and that everyone is entitled to all the rights set out without distinction of any kind including distinction based on sex, the domestication of certain provisions of the Convention on the Elimination of all Forms of Discrimination against Women (CEDAW)[1], and the protocol to the African Charter on the Rights of Women in Africa and the National Gender Policy.

Following the turning down of the bill, a lot of people have taken to the various social media platforms to express their shock at the failure of the Nigerian Senate to pass the bill into law. I, on the other hand, wasn’t surprised that the senators voted out the gender equality bill because the handwriting was clearly on the wall. To start with, the senate of 109 members has just 8 women members; the senate recently joked about made in Nigeria women as if women were some sort of goods; the issue of girl-child abduction and forced marriage has been on the rise recently, and not even once, to the best of my knowledge, has the Nigerian Senate said anything concrete or notable against the trend. And we expect them to pass a gender equality bill into law? Of course not!

Now what is gender equality/parity? Gender equality is the state in which access to rights or opportunities is unaffected by gender. It is achieved when women and men enjoy the same rights and opportunities across all sectors of society, including economic, social and political participation.

A cursory look at the history of the journey to eliminate discrimination against women and promoting equality in Nigeria shows that there has been considerable delay in the process. For instance, the CEDAW has been signed since 1985 but is yet to be domesticated in our laws. This legal instrument unanimously affirm the fact that all human beings are born free and equal in dignity and rights without any distinction of any kind, including distinction as to sex. It recognizes the fact that discrimination against women is incompatible with human dignity and with the welfare of the family and of the society, prevents women’s participation on equal terms with men, in the political, social, economic and cultural life of their countries and is an obstacle to the full development of the potentialities of women in the service of their countries and of humanity.

The gender parity and prohibition of violence against women bill was thrown out amidst differing opinions amongst the senators ranging from cultural to religious grounds some even said it was unconstitutional!

Some of the senators against the bill said it is ‘unAfrican’. In the African custom, women are considered the weaker gender, often repressed, seen as a baby making machine and as property. In Nigeria, like most other African countries, we live in a patriarchal society in which it is ‘unthinkable’ that a woman can rank at par with her male counterparts. Women are supposedly to be seen and not heard. The Nigerian (African) culture equally disinherits wives and daughters. In the home front, women are subjected to all sorts of inhuman and degrading treatment. Our culture strictly restricts women to the stereotyped role of home keeping and childrearing.

Until very recently, women couldn’t actively participate in politics because ‘their place belonged in the kitchen’. Even in the present day Senate, only 8 out of the 109 members are women.

Some of the senators used the religious aspect to counter the bill. Both the Christians and the Muslim members of the Senate found one passage or the other to back their claims. The senators argued vigorously and passionately that gender equality is against the tenets of their religion. Some even went as far as quoting some passages in the holy books to support their assertion.

According to some senators, the bill was unconstitutional because the Sharia Court of Appeal, which is enshrined in the constitution, is empowered to address issues of discrimination against women as they insisted that initiating a new law to guarantee the equality of men and women would be a violation of the provision of the constitution. It was also the contention of some of the senators that the bill was unnecessary.

From the aforementioned reasons given by the senators for the refusal of the bill, we cannot deny the fact that gender inequality is still very much in our culture, both social and political and what is more? Gender inequality has even been given credence by some of our laws. For instance, the supposed legalization of marital rape[2], prescription of lesser punishment where the victim of the assault is a female[3], wife chastisement[4] which has created a fertile ground for violence against women and the empowerment of the Minister of Labour to make regulations that prohibit women from undertaking certain jobs[5] to mention but a few has promoted discrimination against women especially in Nigeria.

So yes, flowing from above, we can see that gender equality or parity is not part of our cultural heritage, but are we then going to sit here till we die? Is it going to be an issue of ‘as it was in the beginning is now and ever shall be’?

The worrisome aspect of this discrimination is that it has persisted for so long that it is now so deeply rooted and institutionalized in Nigerian system that uprooting same would definitely pose an uphill task.

Gender discrimination, has created wide gender gaps in many countries of the world, with very devastating social, economic and, health consequences on the members of the female gender, who have been intensely marginalized, and subjugated to the background. Women Gender Equality issues has become a global core commitment because equality between men and women is just fair and right. The attainment of gender equality is not only seen as an end in itself, but as a prerequisite for the achievement of sustainable development.

The rejection of the gender parity and prohibition of violence against women bill at its second reading marked the third time the bill would suffer such a setback in the Senate, as similar bills had been equally rejected by the sixth and seventh sessions of the Senate.

Let’s face it, whether we like it or not, the world is evolving and gender equality is one of the socio-political issues that we will have to face head-on at one point or the other. The passage of the gender parity and Prohibition of violence against women bill wasn’t going to guarantee equality, it would just have lent legal credence to the fight against discrimination of women but shooting it down by the legislators only echoes the fact that we are not against discrimination against Nigerian women, and that it is permissible. So what am I saying in essence? Gender inequality is an ideology that will take much more than a legislation to eradicate.

A penny for your thought!

Now, going by the excuses given by our senators for turning down this gender equality bill, the question is this: are we going to be continually bound by our customs? Even the seemingly barbaric ones? Is it really our cultural and religious backgrounds that are tying our hands in relation to gender equality? Or are we just using it as a charade? Is the male ego the basic contender in this war for gender equality? Or is it too early for us as a country to actualize gender equality? Let us know what you feel about the issue of gender equality in Nigeria. Do you feel we will actually get there, and soon?