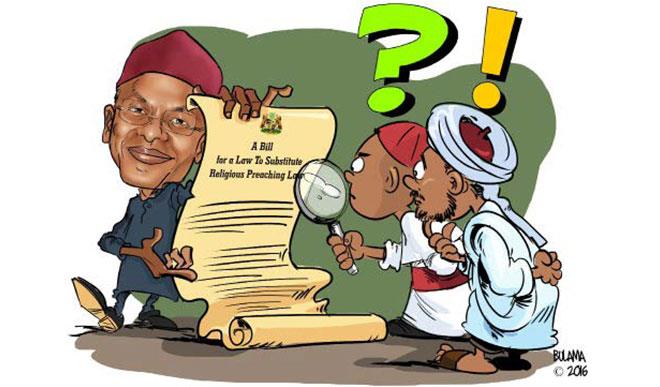 SUMMARY OF THE BILL

The bill has 15 Sections altogether. Sections 1 and 2 of the Bill provides for the citation and commencement clauses while section 3 is the interpretation section.

According to the bill, the two major religions in the state (i.e. Christian and Muslim) shall be regulated by a committee of the Jama’atu Nasril Islam (JNI) with equal representation of Izala and Darika religious groups in the case of Muslims; a committee set up by the Christian Association of Nigeria (CAN) in the case of Christians; and the inter-faith ministerial committee to be appointed by the Governor[1]. The members of the ministerial committee may be paid such allowances as may be determined by the Governor[2].

The two committees, JNI and CAN, are to issue licenses approved by the ministerial committee to preachers, which licence shall be issued for a period not exceeding one year, while a visiting preacher not based in Kaduna shall be issued a permit for the period of the event that brought him to the state[3].

Similar committees are to be set up in the local government areas of the state with the aim of screening applications for licenses in the local areas and ensuring compliance with the provisions of the licence as well as making necessary recommendations for licensing to the ministerial committee for approval. The committee is also saddled with the responsibility of registering accredited preachers of all religious groups and organizations operating in the Local Government Area[4].

The bill also empowers the Kaduna State chapters of JNI and CAN to keep records of all the churches and mosques, including the data of all preachers in the state[5].

The bill restricts the playing of all cassettes, CDs, flash drives or any other communication gadgets containing religious recordings from accredited preachers to one’s house, inside entrance, inside the church, inside the mosque, and any other designated place of worship[6]. The bill further prohibits the playing of cassettes containing religious recordings that use abusive language against any person, religious organization or religious leaders[7].

The bill makes it an offence for any person to preach without a valid licence; play a religious cassette or use a loud speaker for religious purposes after 8pm in public places; use a loud speaker for religious purposes other than inside a mosque or church and the surrounding area outside the stipulated prayer times; use a loudspeaker in vehicles plying the streets with religious recording; abuse religious books; incite disturbances of the public peace; abuse or use any derogatory term in describing any religion; or carry weapons of any description, whether concealed or not, in places of worship or to any other place with a view to causing religious disturbance[8].

Anyone found guilty under the bill shall be liable on conviction to a term of imprisonment not exceeding two years or a fine of N200,000 or both; and may, in addition, have his license revoked if he is a licensed preacher[9].

The courts having jurisdiction to try offences relating to the Law are the Sharia court and customary court[10]. Section 15 of the bill repeals the Kaduna state regulation of religious preaching Edit No. 7 of 1984.

Is the Bill really that biased?

A lot of people have declared the bill dead on arrival even when they are yet to know the provisions of the Bill. There have been several kicks against the bill as many perceived it to be a gag on how one practices his religion. Particularly, the Christian folks feel threatened by this bill and a wide array of religious groups and individuals have come out to voice their opinion on the bill, some even handed down threats.

On the surface of it, the bill seems balanced and unbiased as it took into cognizance the two prominent religions in the state and made adequate provision for the representation of both groups. However, upon a cursory look at the bill, one will discover that some provisions tend to favour the Muslims more than their Christian counterparts.

Also, the prohibition of the playing of religious cassette or use a loud speaker for religious purposes after 8pm in public places is somehow bias, this is because, 8pm is the last prayer time of the Muslims for the day while Christians often have vigils or retreat or other programmes that span beyond 8pm. Consequently, while not much Muslim activities will be affected by this provision of the bill, the Christian folks will feel it the more.

“This Constitution is supreme and its provisions shall have binding force on all authorities and persons throughout the Federal Republic of Nigeria.” Consequently, anything contrary to the provisions of the constitution is to that extent null, void and of no effect whatsoever.

Section 38 (1) of the constitution guarantees that every person shall be entitled to freedom of thought, conscience and religion, including freedom to change his religion or belief, and freedom, either alone or in a community with others, and in public or in private, to manifest and propagate his religion or belief in worship, teaching, practice and observance. (Italics ours for emphasis)

From the foregoing provision, three basic limbs to the constitutional right to freedom of religion under Section 38 of the 1999 Constitution can be inferred1. The right of every person to belong to any religion 2. The right to change one’s religion either alone or in community with others; and 3. Freedom to manifest and propagate his religion or belief either in public or in private.

The basic way to propagate religion is by preaching, invariably, the constitution permits every citizen to preach in line with its religion. This is in contrast with what the bill seeks to do by defining preacher in its section 3 as a person duly licenced by Jama’atu Nasil-Islam or Christian Association of Nigeria, to preach. Thereby restricting a citizen’s right to propagate his religion, to the obtainment of licence from either the JNI or CAN.

Similarly, by Section 4 of the bill, it sought to create committees that will regulate the two major religions in the state- the JNI for the Muslims and the CAN for the Christians. This is another flaw of the bill, this is because the Nigerian Constitution provides for freedom of association[13]. Both the JNI and CAN are registered bodies under part C of CAMA like any other Organisation or NGO and membership thereof cannot be imposed on the citizens.  It is also known that a person can decide to practice his Christian or Islamic religion and belief alone without regard or reference to other members of the society or the Christian Association of Nigeria (CAN) and the Jama’atu Nasir-Islam (JNI), respectively. For instance, it is on record that the Catholic Church in Nigeria suspended her membership of CAN some years back[14].  We also have many itinerant preachers who have no church or any particular place of worship. Will the bill allow them as preachers without attaching to any denomination? Without mincing words, compelling citizens to be part of, and obtain licence from an organization they are not willingly part of is an infringement of their fundamental rights of Association as entrenched in the Constitution.

It also need be noted that the Constitution does not place restrictions on places where a person can manifest or propagate his religion. On the contrary, Section 38 (1) of the 1999 Constitution expressly allows for public manifestation and propagation of religion. Therefore, the provisions of Section 9 of the Bill which limits the playing of all cassettes, CDs, Flash drive or any other communication gadgets containing religious recordings to the inside of one’s house, entrance porch, inside the Church and Mosque and any other designated place of worship is unconstitutional, null, void and of no effect whatsoever to the extent of its inconsistency with the constitution.

Another downside of the bill is that it lacks depth and it is plagued with a lot of ambiguities. For instance, the bill did not define what a ‘religious recording’ is as used in section 9, or ‘abusive language’ as used in section 10 and thereby placing it at the discretions of the enforcers of the envisaged law. The bill is therefore too narrow in this regard and the likely consequence is that these provisions, being susceptible to mischievous inferences, may invariably lead to the violation of the fundamental right of the citizens to freedom of expression and the press under Section 39 of the 1999 Constitution.

The issue of jurisdiction of court in relation to offences created under the bill is another controversial issue. While it could be assumed that the Sharia court will be for the Muslim faithful, can the same be assumed that the customary court has jurisdiction over Christian adherents? While the tradition and religion of the Muslims have an inextricable symbiotic cohesion and therefore makes it easier for the Sharia Court to assume jurisdiction under the bill, the same reason is not applicable for Christians because Customary Court only has the duty of interpreting and applying the customary law of the people and anybody who is a Christian is not bound to submit to the jurisdiction of the court.

There is no gainsaying the fact that cold wars are brewing in some parts of the country, some of which are fueled by religious diversity and as such, there may be the need to for government to checkmate some of the excesses of the religious factions. However, in doing so, recourse must be had to the due process of law with particular regard to the supremacy of the constitution.