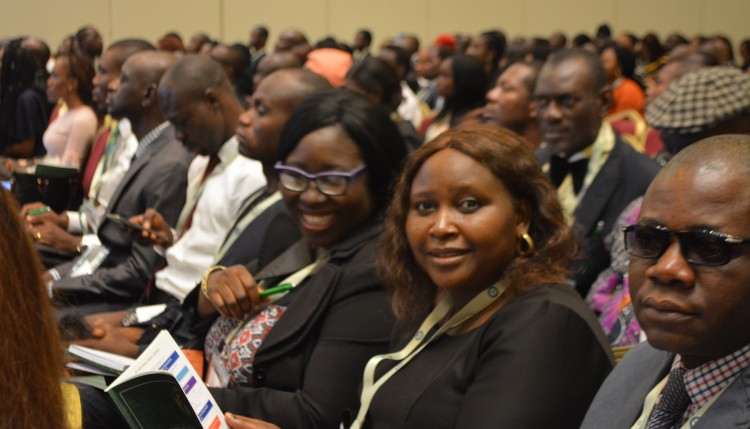 The NBA AGC 2019 has been by far the most engaging gathering of legal professionals in Nigeria. With over 40 Technical Sessions and expository Plenary Sessions, conference delegates have learnt and engaged on topics that will shape the future of the profession for the better.

ARTIFICIAL INTELLIGENCE IN ADR: THE CHANGING FACE OF DISPUTE RESOLUTION

This session was one of the most well-attended sessions at the Conference. This indicated the interest of legal professionals to learn about the changing face of dispute resolution and the role technology will be playing in that future. On the panel were Mohammed Dele Belgore, SAN FCIArb, Funke Aboyade, SAN, Morenike Obi-Farinde, FCIArb and Ope Olugasa (MD/CEO of LawPavilion). The speakers pointed out the new technologies that were being adapted for the legal industry and the possibilities that were opening up to lawyers and dispute resolution experts as a result.

Funke Aboyade SAN, MCIArb pointed out new technology such as telepresence which was already in use in Nigeria. Mr Olugasa then shared on the use of Augmented Reality in the Court Room. He shared on some of the new technologies that LawPavilion was bringing into the legal space including predictive legal analytics, Artificial Intelligence in case management through the company’s Case Manager product, and the Solicitors and Arbitrators’ Toolkit, SAT. Other speakers further shared on the new technologies and the need for a legal framework within which they will operate. During the Q&A session, some of the lawyers wanted to know how lawyers can get into the Lawtech space. They were advised to be open to learning and to begin to learn through available online courses and programmes.

ENVIRONMENTAL JUSTICE AND ECOLOGICAL CRISIS IN NIGERIA: A RULE OF LAW APPROACH

At this session, the key focus was on the environment and how the law in Nigeria could serve as a driver for the protection of the ecological space. One of the Speakers, Ikhide Ehighelua shared that although the Constitution of Nigeria provided for the protection of the environment, it also sabotaged that possibility by containing that provision, Section 20 CFRN, in Chapter 2 as opposed to Chapter 4. Chapter 2 only gives directive principles to the government. Another speaker Dr Ayo Arowolo pointed out that the Ecological Crisis exists in all regions but affects poor areas more. He called for a quick change of systems that will then influence climate change.

The speakers shared extensively on the curriculum of the Nigerian Law School and the existing framework for the preparation of lawyer to practice in Nigeria. They went on to emphasise the need for individual lawyers to further prepare themselves for practice. This included going beyond what was learnt at the Law School. One of the speakers, Maureen Stanley-Idum advised the delegates to become what she described as a ‘rainmaker lawyer’ – one who initiates progress. Another speaker Emokiniovo Dafe-Akpedeye advised lawyers to practice law as a business. He emphasised the need for research, interpersonal skills development and proper practice management.

THE TAXING TASK OF TAXATION AND THE TAXMAN’S TENTACLES

The session on taxation focused on cursory looks at the legal provisions on Taxation in Nigeria. The speakers, Oluseye Arowolo, Bidemi Olumide, Ikechukwu Udume and Olaleye Adebiyi all looked at the framework of taxation in Nigeria and the attitude of people to government taxation. They encourage legal practitioners to look at new ways of aiding the public in appreciating the culture of paying taxes. They shared on new technologies that could be further adapted to aid the process, such as, Mobile applications, QR Code, Blockchain and so on.

TO GET THE CONFERENCE MATERIALS AND PRESENTATIONS OF ALL THE SPEAKERS, DOWNLOAD THE WHOVA APP HERE AND JOIN THE CONFERENCE WITH YOUR UNIQUE CODE (Your code is contained in the welcome message email dated 22nd August 2019. Check your email)

Chairman of the Symposium – Dr. Olisa Agbakoba, SAN
The Chairman of the Symposium started the session by sharing that the rule of law is not a new concept. It has many dimensions including biblical dimensions. In his words, Judicial Independence is a handmaiden of the Rule of Law.
IBA President – Horacio Bernades Neto
The Rule of Law is a puzzle comprising of many things – freedom of speech, free press, free and fair elections. It is when citizens feel that the country cares for them the same way.
What Lawyers have to do:
Absolute commitment to protecting and promoting the rule of law. Demanding that those living next to you live according to the rule of law while also living that way.
Important
1. Independent judiciary
2. A rational approach to punishment
3. Protection of lawyer-client confidential information
4. Legislations that are consistent with International Human Right norms.
Take care of the Rule of Law and the Rule of law will take care of you.
IBA has produced 8 videos to explain the meaning of the Rule of Law on its website.
David Anyaele
One of the issues with Rule of Law is the access to justice for people with disabilities. He shared that one way that changes were being made to remedy the situation included the passing of the Disability Law which makes discrimination against people with disabilities a punishable offence.
Priscilla Ankut – ROLAC
The organisation uses a scheme called Active Citizen Journalists to gather information and get reports on actions against people living with disabilities.
She stated the need to translate the law into practice because laws mean nothing if they do not impact on the quality of life of people. Especially translating them into audio and braille versions for people with disability.
Recommendations to the NBA:
1. Show good examples by making buildings
2. Judicial activism – take up public interest cases and class action surrounding issues involving disability
Stephen Cragg – Bar Human Rights Committee of England and Wales
He emphasised the need for more consideration for Human Rights and Children’s rights.
Then he stated that the abuse of Prosecutorial Powers is an impediment against the Rule of Law. Proper use of prosecution power is important to the Rule of law to ensure the right to a fair trial. The prosecutor must act fairly and lawfully to bring a person to justice. This Right is enshrined in the International law:
He highlighted a few guidelines as provided by the United Nations:
1. Prosecutors should be independent
2. Prosecutors should uphold the law
3. The office of the prosecutor should be separated from that of the judiciary.
Senator Enyinnaya Abaribe – Senate Minority Leader, FRN
He cited the importance of independence beyond the letter of the law for the judiciary.
He then pointed out that the Rule of law is the resistance against targeting a group of people through law by punishing people for acts done before the law came into being.

Hon Justice Obande Ogbuinya, JCA, CON – Justice, Court of Appeal
The Honourable Justice emphasised the independence of the judiciary. He shared elements that will ensure this independence:
Financial Autonomy of the Judicial – consequences – affects the independence of the judiciary
Security of Tenure
Salaries.
On the part to the judges he highlighted:
Respect of the Rue of the Law
Lack of bias
Giving equal opportunity to the parties before them to make their cases.
Judicial Propriety – a judge must be a sworn enemy of corruption.
The dispensation of justice is a fundamental part of the rule of law.
Chris Uche, SAN
Without independent judges, the Rule of Law cannot be upheld. There are ways to fight corruption and the rule of law must not be set aside to do so.  The law on the disparaging of the integrity of judicial officers is still potent. We need to give content and meaning to the concept of the presumption of innocence.
Obedience to Court Orders – the court is the only institutions that the constitution has mandated their obedience.
When the law is unjust, resistance becomes a duty.