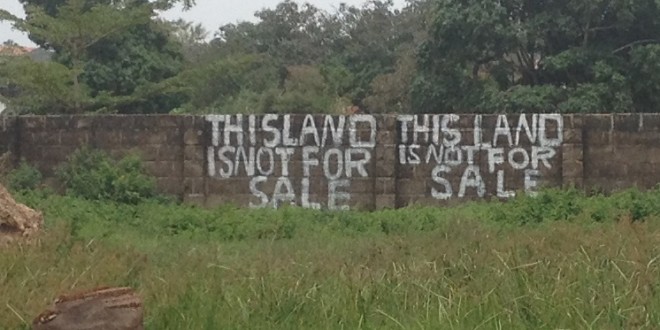 Anybody that has had dealing(s) in the real estate sector in Nigeria, particularly in the urban areas like Lagos and its environs will know the numerous ‘dirts’ and ‘risks’ associated with land acquisition and development. Prominent among the hazards that bewitch the process of land acquisition and ownership in Nigeria is the menace of the ‘omo onile’ (as it is popularly called) which literally means ‘sons of the land owners’; the ‘ajagungbale’ (meaning one that ‘fights war to obtain land’) who forcefully take land from one party and give it to another; the vice of encroachment on land; unlawful sale of land and the unending litigation for declaration of title to mention but a few.

These vices have been ravaging the real estate industry for years un-end especially in the big cities and commercial centers like Lagos and they have gone on for so long that it seems as if the government is oblivious to the plight of the people in relation to land purchase and property development. And these activities have discouraged investors and hindered the ease of doing business in such areas.

Lagosians can however smile and be relieved now, as Governor Akinwumi Ambode on the 15th of August, 2016, signed into law, ‘the Lagos State Properties Protection Law’ which seeks to curb most of the negativity plaguing the real estate sector. The 15-sections Law, which according to its long title is geared at prohibiting forceful entry and illegal occupation of landed properties, violent and fraudulent conducts in relation to landed properties in Lagos state and for connected purposes, is enacted to save would-be property owners and investors from being harassed and exploited by land grabbers. The main objective of the Law is to ensure that investors, businessmen and the general populace carry on their legitimate land/property transactions without any hindrance or intimidation henceforth.

THE PROVISIONS OF THE LAW

The provisions of the Law are as discussed hereunder:

Section 1 is the interpretation section. It defines some key words and the meanings ascribed to them under the Law.

FORCEFUL LAND TAKE OVER OR ENTRY BY VIOLENCE

In times past, many land grabbers have resulted to the use of ‘ajagungbale’ in Lagos to obtain or recover land. Many have lost their lives in the process while some have been maimed for life and several more have been traumatized after having their land seized and resold without a kobo for compensation, not to mention those locked in a cycle of unending court cases over trespass to their land. This practice of use of force or self-help or engaging in any act inconsistent with the proprietary right of the owner to take over any landed property has now become prohibited by virtue of section 2 of the Lagos State Properties Protection Law. Consequently, any person or group of persons who use force from the commencement of the Law, or who has used force to take over a landed property in the State before the commencement of the Law and still remain in possession of the said property three (3) months after the commencement of the Law commits an offence punishable by ten (10) years imprisonment[1].

Similarly, a person who, without lawful authority, uses or threatens violence for the purpose of securing entry into any landed property for himself or for any other person commits an offence punishable on conviction to ten (10) years imprisonment[2] and such person’s right to possession or occupation of the property shall not constitute lawful authority for the use or threat of violence by him or anyone acting on his behalf for the purpose of securing entry into that property[3] and this shall be irrespective of whether or not the violence is directed against the person or against the property and the violence is intended to secure entry for the purpose of acquiring possession of the property or for any other purpose[4].

In the same vein, any person who makes forceful entry with firearms, effective weapons or any obnoxious or chemical materials or is in company of any person so armed or wounds or uses violence on any person commits an offence and is liable on conviction to four (4) years imprisonment[5].

The Law goes further to prohibit a person from placing or causing to be placed on any land or landed property, any land agent(s) for the purpose(s) of forcefully taking over the said land[6].

Section 4 of the new Law provides that a person who is occupying a property as an encroacher and fails to leave the property on being required to do so by or on behalf of the owner of the property commits an offence[7] and on conviction shall be liable to a fine not exceeding five million naira or five years imprisonment or both[8]. The Law extends the meaning of property to include ‘a reference to an access to the property, whether or not any such access itself constitutes property, within the meaning of this Law’[9].

Where such an encroacher has with him any firearms, dangerous/offensive weapon(s) on the property, he commits an offence and is liable on conviction to ten years imprisonment[12].

MACHINERY FOR THE ENFORCEMENT OF THE LAW

In other to prevent private persons from taking laws into their hands, the law precludes any law enforcement agent, vigilante group, ethnic, cultural/traditional militia from having the right to execute the judgment of a Court in respect of any landed property except as may be provided for under the Sherriff and Civil Process Act or any other Law[13].

To ensure that the provisions of the Law is not abused, the Law prohibits frivolous and unwarranted petitions to the Law Enforcement Agency arising from the provisions of the Law knowing such claims contained in the petition to be false. The law therefore requires that a petition in respect of landed property shall be accompanied by a sworn declaration by a petitioner[14].

The Law establishes a task force to enforce the provisions of the Law[15] and vested in it the power to arrest in pursuance of the law alongside any other Law Enforcement Unit/Agency in the State[16] while jurisdiction in respect of offences under the Law was granted to the Special Offences Court and other courts[17].

SALE OF PROPERTY WITHOUT AUTHORITY

Purported sale of land by persons not having legal title to it is by far one of the commonest and most dreaded evils associated with land acquisition. This is because a lot of people conjure different types of ‘title’ to the land that it takes due diligence and lots of prayers on the part of the purchaser not to fall into the wrong hands. It was always common for purported family agents to unlawfully sell family property without the consent of the head of the family, some even issue counterfeited receipts. However, by virtue of this new law, anyone who offers for sale any property knowing that he has no lawful title to the property or authority of the owner to offer for sale commits an offence and is liable on conviction to a fine of five hundred thousand naira only or six months imprisonment or both. Where he actually sells a property to which he has no lawful title which has been previously sold by him or his privies or without lawful authority of the owner, commits an offence and is liable on conviction to a fine not exceeding 100% of the value of the property or to imprisonment for five (5) years or both, and the property shall revert to the lawful owner[18].

It is a known fact that some professionals such as the estate agents and lawyers participate actively in the real estate business. The Law therefore prohibits a professional from facilitating a contractual agreement between a land owning family and any other person knowing that such contractual agreement will contravene the provisions of this Law or any other Law otherwise such professional commits the offence of aiding and abetting the commission of such offence[20]. Similarly, the law provides that any professional who executes a judgment of court without following due process as provided for in the sheriff and Civil Process Act or any other Law commits an offence and any such professional found guilty under the provisions of the Law shall be reported to the relevant professional body for misconduct and necessary actions[21].

PROHIBITION OF DEMAND FOR FEE IN REGARD TO CONSTRUCTION

Section 11 of the Law is by far the most popular provision of the Law. Anybody who has done construction work in Lagos and its environs has one tale or the other to tell about the notorious ‘omo onile’. They are basically hoodlums who lurk around construction areas, charge developers for every tipper of sand/cement/gravel brought to site; then, at various stages of building, they throw in more obstacles and demand payment of huge sums before they allow developers lay the foundation, deck, roof, erect a perimeter fence, dig a borehole and just about anything! In short, they fleece developers at every stage of construction and beat up their workers or prevent them from working if they are not paid and there was little or nothing one could do to stop them. The menace of the ‘Omo Onile’, whose numbers have swelled in recent years amid rising unemployment in Nigeria, has discouraged investors, hindered businesses and held back development in Lagos state.

This trend is what section 11 seeks to address. The section precludes a person, whether for himself or acting as an agent, from demanding for any fee or levy in respect of construction activities on any property, disrupt or obstruct construction works. Consequently, it shall not be business as usual for the ‘omo onile’ henceforth as any person who contravenes the provision of the section commits an offence and shall on conviction be liable to a fine not exceeding one million naira or two years imprisonment or both[22].

However, the preclusion from demanding for any fee or levy in respect of construction shall not be interpreted to preclude land owning families under the authorization of the family head to demand for customary fee for possession (in the name of foundation levy) from buyers or ratification fee pursuant to the judgment of a court of competent jurisdiction[23].

Section 15, which is the last section of the Law, provides that the Law may be cited as the Lagos State Properties Protection Law.

From the provisions of the Law as highlighted above, it could be seen that this Law is the much awaited answer to a lot of the problems associated with land or property acquisition and development in Lagos state and as evinced in the title of the Law, it is for properties protection in Lagos State. It is to ensure that properties and their owners are protected.

Much as this Law seem to be the perfect and absolute solution to the problem of land grabbing in Lagos, its overall effectiveness will depend on the implementation of the provisions of this Law. Consequently, to give effect to this law, all authorities must implement the law to the hilt.

There is no gainsaying the fact that we the citizens also have a vital role to play in making the law an effective one. For instance, citizens would need to report omo-onile infractions to relevant agencies.

Finally, it is expected that with Lagos State taking this bold step in relation to land grabbing and other ancillary negative activities, other states will follow suit.