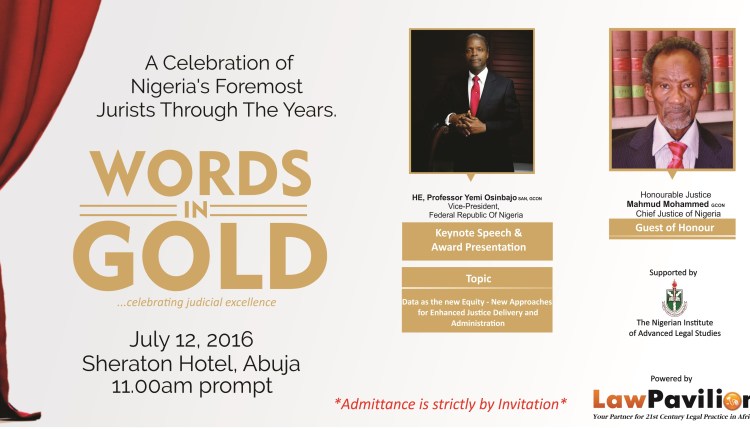 At a time when so much more is being demanded by Nigerians about upholding the Rule of Law in which the Judiciary is at the fulcrum, Africa’s Leading IT Partner to the Legal Services industry has scored another first by putting together a first-of-its-kind Judicial Awards Ceremony dubbed “Words in Gold” to recognise, celebrate and immortalise present and past Justices of the Supreme Court of Nigeria who through their pronouncements have contributed immensely to the development of Law and Jurisprudence.

In what is poised to be a remarkable and iconic event, LawPavilion has taken the bold and unprecedented step of recognising Nigeria’s foremost Judges from 1960 till date.

As Africa’s leading Electronic Law Report and IT Support Partner to the Legal Services Industry in Africa especially Nigeria, LawPavilion easily boasts of the largest database of more than 15,000 Decided cases, Case Index of more than 80,000 issues and Laws of the Federal Republic of Nigeria with updates amongst others.

According to Ope Olugasa, the Managing Director, the concept of the Nigerian Judicial Awards, “Words in Gold” crystallized in the course of the development of the Company’s newest software for the Legal Services Industry, LawPavilion Prime.  This new software is not the usual run of the mill legal research software but is actually Africa’s first and only Case Analytics software.

For more than ten (10) years, LawPavilion through its ground-breaking work in the legal industry, has observed the detailed reasoning of many of the Justices/Judges on the Bench and uncanny ability to apply principles of law and equity to matters and disputes brought before the Court. Until now, those efforts and contributions had gone almost unnoticed or uncelebrated, and thus compelled LawPavilion to act in this capacity to honour and celebrate outstanding and distinguished Justices of the Supreme Court in particular being the highest Court in the land.

In Mr Olugasa’s words, “as a foremost service provider in the legal services industry, we have deemed it necessary and fitting to recognise and celebrate eminent Jurists, both past and present who have sat in the hallowed Chambers of our highest courts and made pronouncements that are worthy of being in any Hall of Fame.”

The “Words in Gold” Judicial Awards idea was borne out of our work through several years during which we have been collecting, collating, analysing and publishing the intellectually stimulating judgments that have emanated from our Superior Courts of Record, particularly the Supreme Court. Our objective is quite simple really – we recognise that Judges give up so much in order to carry out their duties and often personal sacrifices have been made. Often, our society has been more concerned about what has not been done rather than recognise and applaud appropriately what has been done. For too long, our Justices have laboured tirelessly and often behind the scene in upholding the Rule of Law and ensuring our steady progress towards a just and egalitarian society.

Having read through some of the distilled judgments of my Lords, our organisation has been simply amazed at the fluidity of thoughts and ability to distil the real issues whether in leading or dissenting Judgments emanating from the Supreme Court of Nigeria. Our goal ultimately is to celebrate every Nigerian Judge whose words must be immortalized in Gold. We are only just starting with the Supreme Court Justices being the highest Court in the land whom all other Courts must follow as a matter of necessity and compulsion.”

The Nigerian Judicial Awards “Words in Gold” has the support and goodwill of eminent and notable stakeholders in the Justice Sector in Nigeria such as His Excellency, the Vice President of the Federal Republic of Nigeria, Prof Yemi Osinbajo SAN who will be delivering the Keynote Address themed “Data as the new Equity – New Approaches for Enhanced Justice Delivery and Administration.

Notable dignitaries expected at the event holding at the Ladi Kwali Hall, Sheraton Abuja on the 12th of July 2016 by 11.00am include Justices of the Supreme Court (Rtd. and present), Justices of the Court of Appeal (Rtd. and present), Honourable Attorney General of the Federation, Attorney Generals from all the 36 States, distinguished Senior Advocates of Nigeria, National Executive and Branch Executive members of the Nigerian Bar Association and other dignitaries with interest in the administration and delivery of justice in Nigeria.